Could embedded microchips benefit employees and their companies? It is very reminiscent of Orwell’s classic, ‘1984’ and very Big Brother. 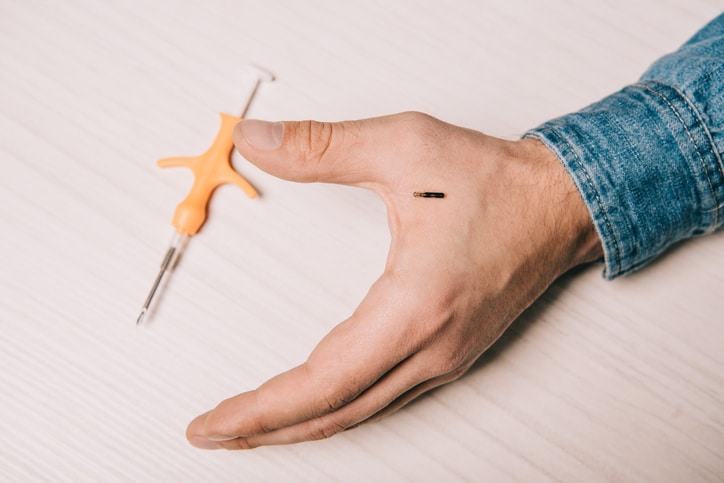 In fact, companies are already testing out the idea.

UK-based BioTeq has already given 150 of its people voluntary implants whilst Sweden’s Biohax is reported to be in discussions with several legal and financial institutions.

Microchips no bigger than a grain of rice can be implanted under the skin between the thumb and forefinger – enabling people to open the front door of their home, enter their office or start their car at the wave of a hand.

The idea has already faced opposition from Britain’s Trades Union Congress. It fears microchipping would give bosses even more control over their workers. The Confederation of British Industry has also voiced concerns.

Currently, the main benefit of embedding microchips is to enable access to restricted areas and confidential data to be controlled more tightly as it would be easier to verify authorised people.

Biohax’s founder, Jowan Osterlund, claims his company is in talks with a UK financial services company that employs hundreds of thousands of people which is considering introducing embedded microchips whilst the idea is already being used in his homeland. Around 4,000 Swedes are microchipped including 85 people from the travel group Tui.

Gary Jowett from Computer & Network Consultants in Brighton said: “There are advantages to using the uniqueness of a human being to control access to restricted areas or confidential information. But there are also implications for personal privacy and human rights if chips are used for tracking a person’s every movement. It’s likely that new legislation or amendments to existing laws need to be completed before such a practice can become a mainstream activity.”

The TUC claims that the insertion of such chips could also infringe on the requirements of the recently-introduced General Data Protection Regulation as it may be another route for third parties to hack into personal data.

There’s also a nightmare scenario already foretold in some fictional dramas, where an individual is kidnapped to act as the key to unlock a bank vault or other secure locations. So, would the practice make some people more vulnerable to attacks?

Companies also need to consider when an employee’s microchip is deactivated should they hand in their notice. Would their access to restricted information be removed at the start of their notice or at the end? Someone preparing to leave an organisation may not be so concerned about handling confidential information with care.

Gary Jowett added: “New technology can add useful protection for organisations and protect employees too. But there needs to be careful consideration of how to establish proper protocols for voluntary microchipping and organisations need to seek expert advice about how to manage the risks associated with the practice.”